skip to main | skip to sidebar

Occasionally, parcels arrive in the mail and sweep you away with smiles because of what's contained inside. It might be a parcel from StrawberryNet, with cosmetics wrapped in silver paper and tied with a purple ribbon, or it could be an ebay record win with extra goodies in it. Last Friday, a package from the lovely Camila and Thor at WeePOP! Records in London landed in my mailbox to slap a smile on my face for the long weekend.

Specialising in limited run 3" releases, I have to say, I've never seen more immaculately packaged releases in my life. The two EPs I received were so lovingly hand-crafted and carefully constructed that I felt as though I was destroying special works of craft when I went to listen to them. Look at how pretty they are!! 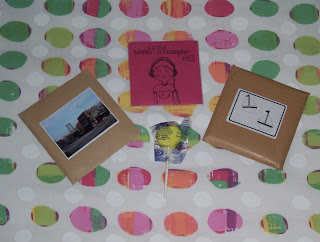 As I've said before, I have the oldest digital camera in the world, so this picture really doesn't do these releases justice. But, given the artistry in the packaging, how do they sound?

First up, The Darlings are, well, a darling five-piece from London, who write pretty songs about girls stealing boyfriends, stick homemade postcard pictures on their records and dedicate their releases to Grant McLennan. Ah, I can understand these sentiments. The "Photo" EP contains two cutesy originals - "Anything You Want" and "Emily" - which you should listen to over and over on their Myspace page, as well as a cover of AC/DC's "You Shook Me All Night Long". This makes it two pop covers of the same AC/DC song in the one weekend - can somebody find me another so I can make it a trifecta? The guitars on "Anything You Want" sound kinda Spanish, and Elizabeth's vocals are just so warm and inviting, while "Emily" is a super twee track - again, the ukelele gives the song a summer holiday vibe. Oh, and judging by the liner notes, there's a Queensland connection, with Elizabeth's family owning a holiday house here. Yay!

Next, there's The Motifs, from Melbourne. It's sinful of me to admit that I knew nary a thing about The Motifs until a few weeks ago, but now that I have, I'm well and truly converted. Recorded in Japan, the "Matches" EP is full of shy, lo-fi pop songs that, admittedly, would be drowned out by your average pub crowd, but would sparkle with a receptive, captive audience. Soft harmonies stand out over a simple acoustic guitar and Casio drums - very pretty. It's a bit early Architecture in Helsinki, a bit Tenniscoats, and I love it to bits. I want them to take over the indie pop world in 2008!! Oh yes, and the sailboats on the cover of this EP are so adorable!

Lastly, there's the first weePOP! sampler, featuring tasty cuts from Roadside Poppies, Bunnygrunt and The Just Joans, amongst others. I could dance all night long to these songs! I'm going to find myself a little box to store all these 3"s in, because I'm sure there's a collection to be built from weePOP! this year.
Posted by alex at 6:28 PM

alex
alex is a pop fangirl, craft enthusiast and now keen runner currently residing in melbourne, australia. she likes to get obsessive about enthusiasms and spread the love with as many people as possible through the written word. Email me: alex (dot) goffey (at) gmail (dot) com